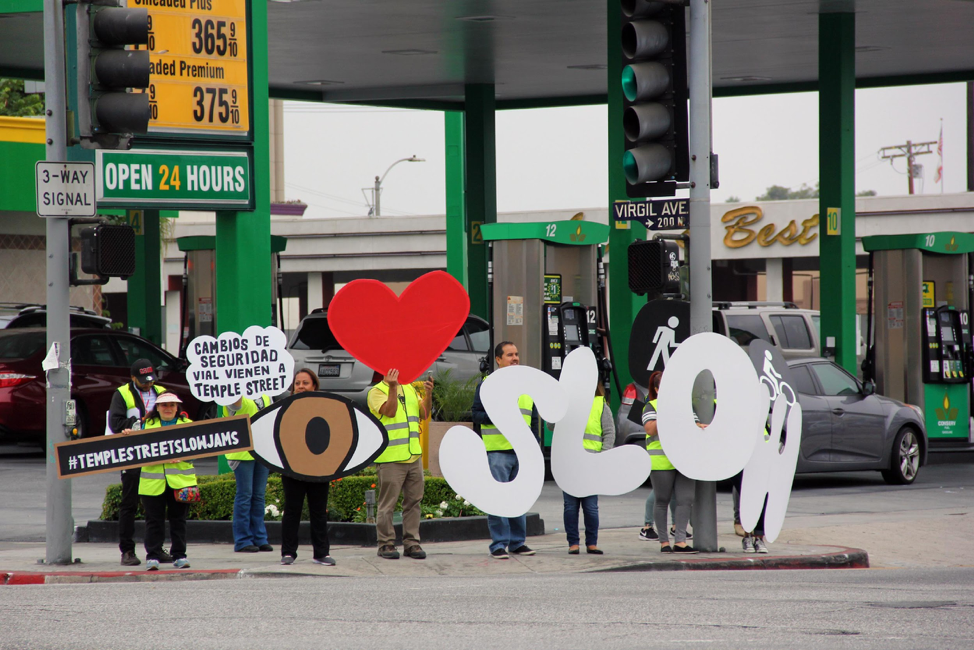 Posted at 22:30h in Vision Zero by admin
Share

Cities are getting serious about ending pedestrian fatalities, but their efforts sidestep equity issues and fail to elevate community partners with the agency to enact real change.  Several organizations in Los Angeles are pioneering innovative ways to engage communities in the civic engagement process.

Ten months ago when I moved to Los Angeles, I was tasked with locating a route from my new apartment to the nearby Vermont and Beverly Metro Station. My attempts to navigate the one-mile distance on foot exposed me to previously unfamiliar, but now painfully apparent struggles known to pedestrians in Los Angeles. Put simply, walking around is hard. And not only is it hard, it’s dangerous. There are missing crosswalks, mistakenly timed traffic signals, high curbs, no curb-cuts— the list goes on.

In Historic Filipinotown an ongoing effort throughout 2017 and 2018 by pedestrian advocacy organization LA Walks and social enterprise Public Matters demonstrated the efficacy of a people-first engagement strategy in combatting these challenges. Their campaign, dubbed “Temple Street Slow Jams,” elevated the voices of those most affected by road safety in Historic Filipinotown and helped community members develop tools to address needed changes in their neighborhood. The slow jams were initially funded by LADOT as part of outreach and education efforts for LADOT’s Vision Zero initiative—the city’s lofty project to end traffic fatalities and serious injuries by 2025. 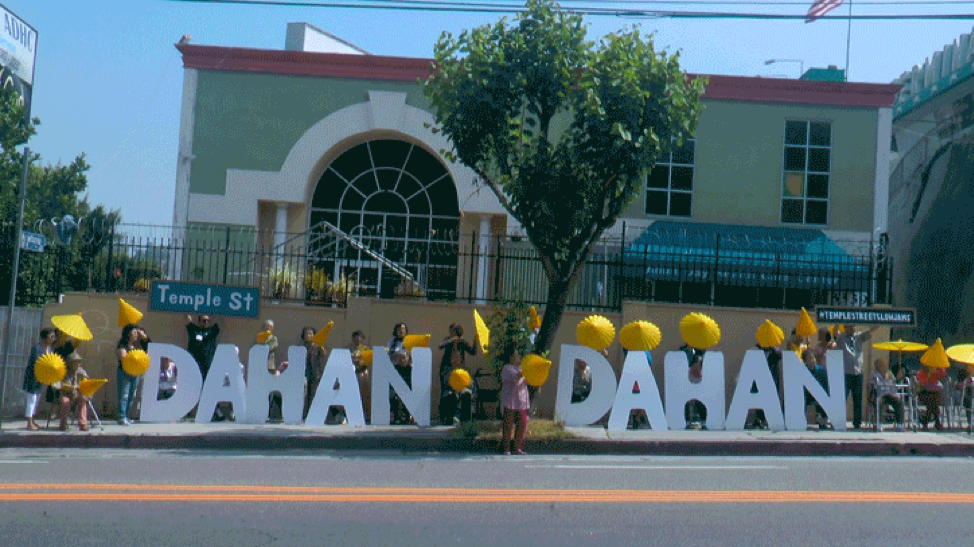 The slow jam team, which in 2017 included local partners Gabba Gallery and the Pilipino Workers Center (PWC), executed a two-year strategy that interspersed fun and visually engaging events with community network building. As a crowdsourced “slow jams” playlist cast an uplifting soundtrack, participants escorted pedestrians around the corridor holding signs in various languages telling drivers to “slow down.” Older adults from the Silver Lake Adult Day Healthcare Center could be seen dancing and cheering along the sidewalks with bright yellow umbrellas. Children from local schools marched down the corridor from each end, meeting triumphantly in the middle. The nature of the slow jams is summed up best by Emilia Crotty, the now former Executive Director of LA Walks: “It’s very human. It humanizes the driver and it humanizes the people on the street. And it forces people to pay attention.” 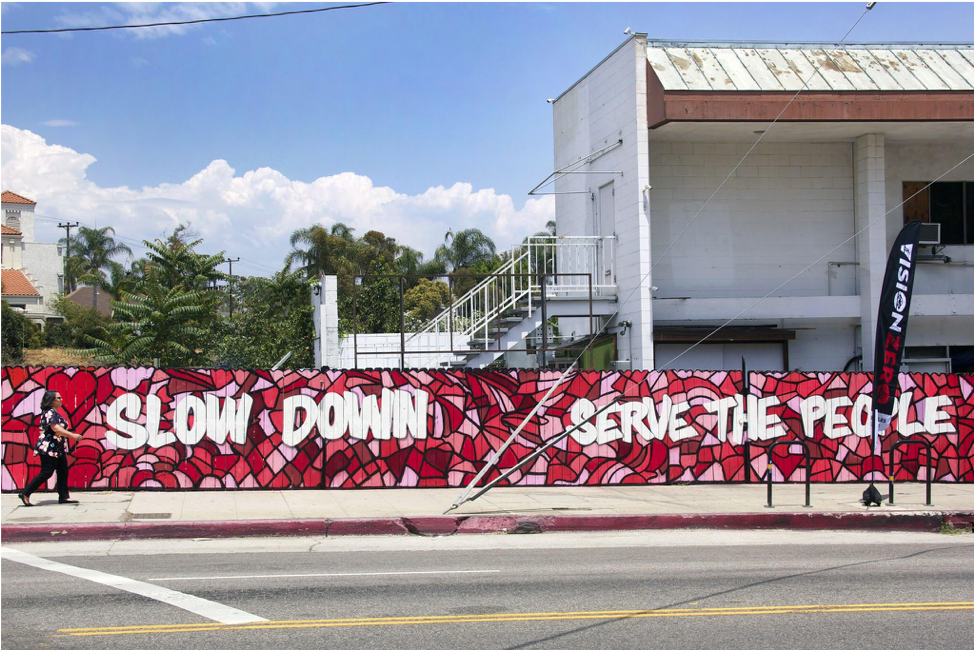 Temple Street Slow Jam mural on the fence of The Park’s Finest BBQ, painted by Jason Ostro and dytch66 with words from owner Johneric Concordia.

The colorful visual of the slow jams played an integral part in making the campaign memorable. But holistically, the efforts were unique because the team committed to a multi-faceted, community focused approach to engagement. Reanne Estrada, Creative Director for Public Matters, characterized the process as “embedding the messaging in the context of the neighborhood.” This “embedded” effort builds what Crotty called “human infrastructure.” Namely, creating the collective agency within communities to advocate for change they need.

In the context of the slow jams, this human infrastructure building amplified a diverse array of voices in communications between community residents and LADOT staff. A parent group from Camino Nuevo Charter Academy and Vista Charter Middle School, Padres en Acción, formed as a result of the slow jams and has continued to advocate for increased safety measures to LADOT, elected officials, and throughout their neighborhood. 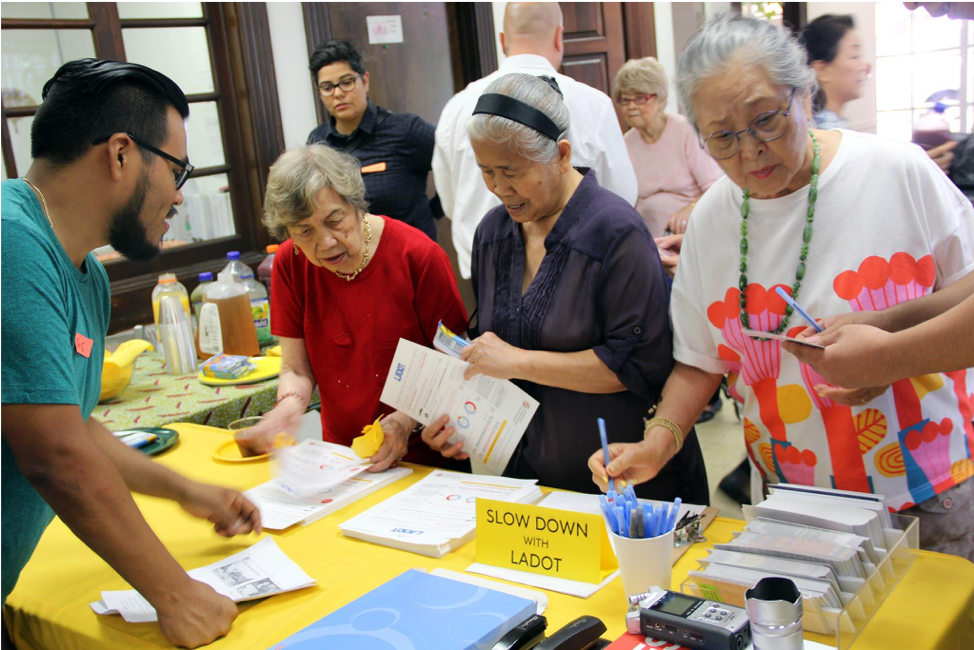 Older adults pick up materials before a street safety mapping workshop in 2018.

The organizing strategy of the slow jams recognized the barriers to entry for civic participation and helped provide the tools and opportunities for community members to overcome them. But ultimately, this style of engagement is not feasible without continued financial support from organizations like LADOT. Vision Zero’s infrastructure changes should include an outreach and engagement component that does more than just notify neighborhoods of proposed changes. It should recognize the need for a multi-pronged approach that partners public agencies with local residents and organizations.

And finally, conversations about road safety reforms should actively and continuously involve the perspectives of communities who are most at risk. Because LA’s pedestrian safety crisis isn’t just about unsafe streets–it’s about who is on them when cars collide with pedestrians. The reality is that some can afford to drive and some can’t. Not being able to afford a car, or not wanting a car, shouldn’t put you at risk of death or injury. Traffic safety is an equity issue, and one we have the tools to fix if we make a concerted and unified effort put people first.