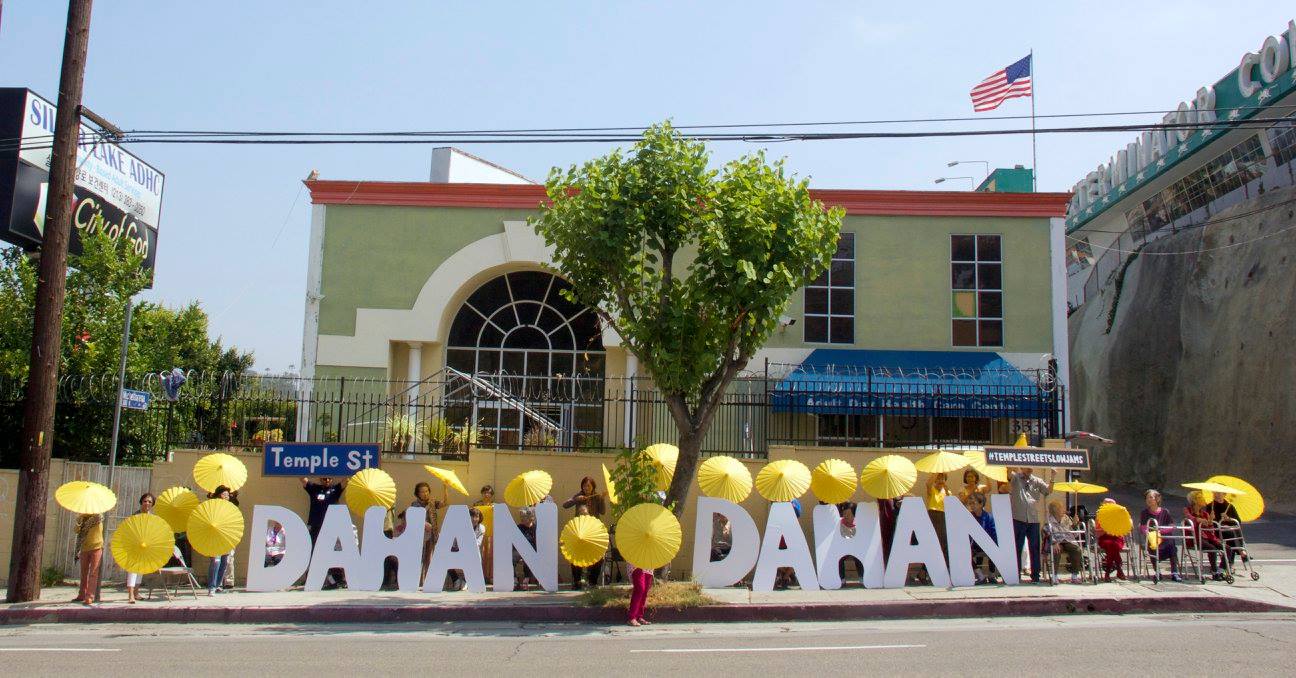 To just pick up the phone and call someone is a daunting task. I have to continuously recite what I’m going to say in order to prepare for whatever situation might occur. “Hi, my name is Shirley Ramirez. I’m an Urban Futures Lab Fellow with Public Matters, a community group that has been working in Historic Filipinotown for about 10 years. We’re working on Los Angeles: Vision Zero. It is an initiative by Mayor Eric Garcetti to end all pedestrian traffic deaths by 2025. Specifically, in Historic Filipinotown we are doing a series of events called Temple Street Slow Jams, a week-long activation, that includes murals, street choreography and community conversations to bring awareness of this issue. I would love to get the seniors at Silver Lake Adult Day Health Care Center involved. Would you be willing to meet and talk more in depth about possibly getting your group involved?”

This was completely out of my element. Literally. The thoughts came pouring in. This isn’t my neighborhood. They might not be of my ethnic background. There might be a language barrier. They’re much older than me. What if they don’t think I’m worthy of talking to? What if they find out that I’m not from their neighborhood? What am I going to do if they find out? Will they care? Will they notice how nervous I am? The thoughts were overwhelming.

Although I have worked on other projects where I’ve had to speak to people, this was different. I was the first person that would approach the residents and organizations of Historic Filipinotown and Echo Park with any information about Public Matters, Vision Zero Los Angeles or Temple Street Slow Jams. I was the person that was supposed to have all the information and direction. If only they knew that I was just a little bit less lost than they were. To be the voice and the point of contact on behalf of the organization was not easy.

This isn’t the work that I typically do. I work with my own neighborhood in East Los Angeles with a project called Greetings from East L.A. (GELA). We work with seniors in my old high school, East Los Angeles Renaissance Academy in Esteban E. Torres High School. All within my comfort zone. Talking to high school seniors about urban planning, design, policy, or East L.A. is a piece of cake in comparison to this–something completely new to me. All I had to worry about in GELA was if the students were understanding the curriculum and if it was interesting enough for them. My role is to be a role model to them. But, in Temple Street Slows Jams, I had to be the point of contact. I was the person in charge of a section of Temple Street that would then participate in one of the street activations for each Temple Street Slow Jam.  Basically, I had to make sure community members along this particular section of Temple St. were a part of the event.

To pick up the phone was the most difficult part. As I began to “meet” the people on the other end of the line, my task became easier and harder at the same time. It was easy because I was getting to know them. The relationship was being built. They knew who I was. They were kind to me and wanted to listen to what I had to say. Then, they let me in. I got to know their stories: the realness of their everyday lives, and the fact that fatality on Temple Street was something that was on their minds. They didn’t feel their voices were heard or that they mattered to the policymakers. The people on Temple Street had things to share.

In listening to people, my passion grew. It wasn’t just a task anymore. All of a sudden, it wasn’t difficult for me to pick up the phone. This wasn’t just another project. I was able to make it my own. Silver Lake Adult Day Health Care Center had been advocating for a crosswalk on Robinson Street for years but they were told it was too dangerous. They were offered no alternative. They were just shut down. It was frustrating that they had voiced their concerns and still were not being heard.

People at the Center shared with me that a couple died when crossing on the nonexistent intersection at Robinson Street and Temple Street. Several others had had close calls. Directly across from the Center is a bus stop. The nearest crosswalk or intersection is a long, hilly walk that’s extremely difficult for the seniors. Instead of going this distance, most of them choose to risk crossing the busy street where cars zoom by at 40 mph.

I took to heart every story, every difficulty that they shared with me. I made it my own. This was the only way to conquer my own discomfort. 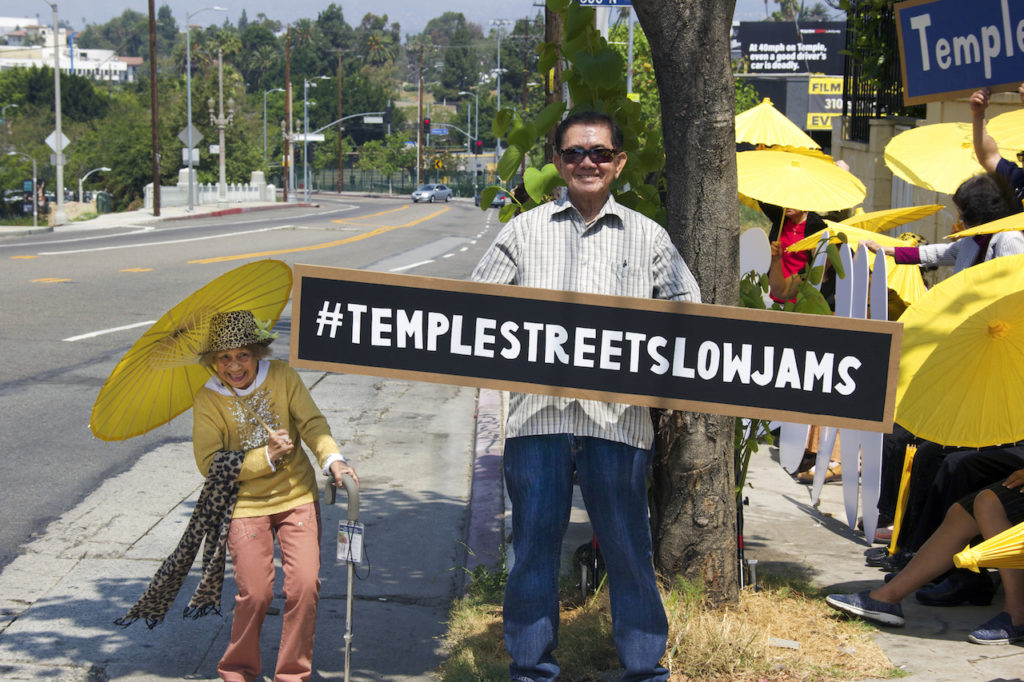 The actual Slow Jams events were a piece of cake compared to the work that led up to them. The relationships were set. It was cool to see the front of Silver Lake Adult Day Health Care Center with over 60 seniors holding parasols, “DAHAN DAHAN” letters, and other props. These were used so that the drivers would pass by slowly, or “dahan dahan” in Tagalog. There was one senior, everyone called her Tita, who stood with her parasol on the street yelling at cars to slow down. She, along with the other seniors, made Temple Street Slow Jams their own. Collectively, the seniors took charge in telling drivers to slow down that day.

The first step in anything is challenging. To push yourself when you don’t know what is ahead is terrifying. When you actually take the first step though, it doesn’t end up being as frightening as you would’ve thought. I couldn’t let my thoughts or anxieties take a hold of me, or else I wouldn’t have learned as much as I did. I was able to get uncomfortable and not let it overcome me.

I’ve now had the experience of working outside my own neighborhood. In an era where everything is done behind a screen, it was so important to build an actual connection with the people in Historic Filipinotown. Community engagement isn’t just done through email. Real relationships are made through real conversations. Whatever project or job that I do in the future will require me to speak to people that I don’t know. Temple Street Slow Jams was a stepping stone in helping move out of my comfort zone.