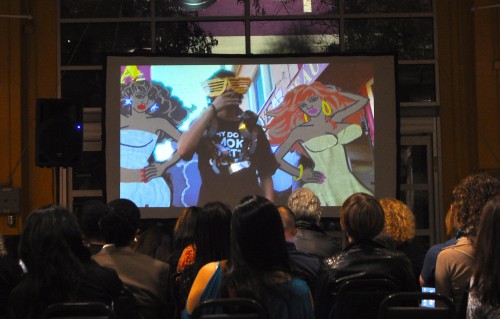 09 Apr Out in the World: The Truth About Flavor at Long Live LA + The Coalition for a Tobacco Free LA County March 2015 Meeting

Posted at 18:52h in The Truth About Flavor, Xochilt Sanchez by admin
Share

On Wednesday, March 18, 2015, The Truth About Flavor myth-buster videos had their world premiere at Mercado La Paloma as part of Long Live LA. Long Live LA is a collection of 30 short videos commissioned byFreewaves and produced by a diverse group of artists to explore issues around public health and mental health. Public Matters, with The Truth About Flavor project, was one of these groups. Long Live LA was the first opportunity for the students from the Community Health Advocates School (CHAS) at Augustus Hawkins High School to present their work to the public.

Mercado La Paloma is a vivacious marketplace comprised of international food vendors and artisan stands. Located in Historic South Central, the Mercado served as the perfect setting for the event, reflecting the diversity and fluidity of the audience, artists and work. Despite the chilly Wednesday night with rain clouds looming overhead, the Mercado’s warm embrace was felt through with the wafting aromas of fresh tamales andbocadillos from the surrounding restaurants and food stands and the colorful banners and hanging strings of papel picado that danced above our heads. Large plastic bins filled to the brim with bright yellow and deep maroon aquas frescas completed the festive scene – a fiesta in celebration of the artists’ and students’ work and community gathering.

Hosted by Anne Bray of Freewaves, the screening took on a loose panel discussion form. Standing against a plain white screen, Anne introduced each artist and his/her respective piece, giving each artist the space to present about her/his work and the intended impact of these videos. Knowing that they would have the opportunity to present, the CHAS students worked diligently with Public Matters in the classroom in the months leading up to the event to develop their public speaking skills and to design a short presentation that could introduce themselves, the project, and the videos.

On that night, our CHAS students, a group of 15, hummed nervously, yet bounced with excitement. They had arrived early at the Mercado to sneak in a final rehearsal. After the countless times they had practiced in class, the clock was winding down and after every passing video it got closer to their turn. The students were lit by nervousness; it tingled out of their finger tips. It was their time to present: to present to the community of family members, friends and artists assembled in the space.

They braved through their nervousness beaming with the opportunity to take the spotlight and fulfill their role as community health advocates. They wove together personal testimonials with informational passages on flavored cigars and cigarillos, including the negative consequences of the heavy presence of tobacco retail in their community. They ended their presentation by taking a stand against Big Tobacco’s predatory marketing strategies by raising up yellow and black signs that read: #NotAReplacement. In honor of Kick-Butts Day, which also happened to fall on March 18, #NotAReplacement is part of a national social media movement for young people to stand against Big Tobacco and state that they refuse to become the next generation of replacement smokers. The black and yellow signs had been placed around the room and the students invited the audience in raising their signs high against Big Tobacco for the sake of themselves, their futures and future of their community.

In a collective roar of support, the audience joined our students in taking #NotAReplacement selfies.

After the presentation concluded, the students dispersed from the front of the room to join the crowd and watch the myth-buster videos they had worked so hard on. They giggled along, content with audience reactions, and glowed when the collective laughter and rounds of applause filled the room at the conclusion of their videos. After the screening, the students were barraged by various audience members impressed by the caliber of work and happy to see the investment in community development by an eager next generation of community leaders.